We arrived in London with my Father’s perpetual big city advice ringing as always in my ears – ‘keep your wallet next to your balls Son’. We’re country people see? Big metropolitan cities aren’t our usual hang out. We live and roam in green wide open spaces. Look out of our draughty old Welsh farmhouse windows at the moment and you’ll see fields, trees, sheep, dogs and mountains and that’s about it. But not this weekend. This weekend, we were in the big smoke. The former first city of the greatest empire the World has ever seen. We were in London baby, and boy did we have a good ol’ Cockney knees up while we were there.

My Sister, Brother in Law, Me, My Wife, and our four small Daughters rolled into St.Pancras Station early on a Saturday morning, before heading underground and jumping onto the Piccadilly line to Leicester Square. I love the tube. Always have. The heat, the smell, the bustle of it all. The advertisements for West End musicals, exhibitions, and performances of all kinds plastered all over the walls. The buskers singing and bashing out tunes on their guitars and saxophones. I marvel at the feat of engineering it took to build it every time. I think about all the Irish navvies that dug those tunnels with picks and shovels, dynamite and muscles, curses and sweat. What men they must have been. The Children squeal with delight at every bump and turn in the track and we embark breathless and head up into the tumult and excitement of central London. To Leicester Square and the newly opened LEGO store.

We walk past the Odeon Cinema where all the big film premieres are held and join the queue (How exquisitely British) of excited children and adults waiting to head inside. Our eldest daughter Gwen animated about the StarWars and Batman lego, and Ffion and Mair awestruck at the giant model of Big Ben they can see at the window. The staff heading the queue, in top hats and long black frock coats, friendly and animated with the Children. Tourists from every corner of the globe, as well as those from a small corner of North East Wales, gather all around. We finally get inside and take a family photo in the huge LEGO tube carriage with William Shakespeare and The Queen on either side of us, as you do. And the Children get pictured with a London Bobby and Batman (LEGO, not real). They play with the toys, we look all around, oo and ah at the displays some more, and they depart with their promised treats – a keyring each. What? We may be in the City for the weekend, but we’re still farmers remember..

From there it’s soggy tuna sandwiches and crisps for lunch. And where do we eat our picnic? The foyer of the prestigious National Portrait Gallery. Home of some of the most priceless works of art in the Country. And do the staff mind? Does anyone care that us and our children just nip in there to eat our packed lunch? Not a bit. No one bats an eyelid. Bloody marvellous. So with us all re-energised, we head back outdoors, and down to Trafalgar Square. Ah Trafalgar Square. Just the name of it fills you with pride, let alone the sight of it. It never fails to take my breathe away as you walk around the corner and Nelson’s Column looms into view. Over 50 metres tall with a statue of the greatest of Britons, Admiral Horatio Lord Nelson on top, it almost makes you want to down tools, button on a red coat and sign up for an invasion of France. I give the column a wink and hop on one leg quickly (one for the cricket fans there), but despite my best history geek Dad efforts however, the Children are far more enthusiastic about the street performers, and especially the ‘floating Yoda.’ Eventually we drag them on down to the huge bronze Lions at the corners of the column, and they get excited at the thought of one of them coming to life and them riding on his back around the City, as happened in a book Gwen got for Christmas (Katie in London by James Mayhew – highly recommended.) We take photos and move on again.

We walk under the splendidly neoclassical Admiralty Arch, at one point the official residence of the First Sea Lord, one Winston Leonard Spencer Churchill (Whatever happened to him?), and start the walk up the broad open space of the Mall. With St. James’s Park on our left we pass the monument to Captain Cook and I begin to tell the children about this gruff, brilliant son of Yorkshire who sailed through previously uncharted seas and discovered Australia and New Zealand, before they eventually carry on without me, impatient to see the ‘Queen’s House’ at the end. We walk on past memorials to the Royal Marines and The Guards Regiments, and eventually past the awe-inspiring golden statue commemorating Queen Victoria, featuring the figures of Victory, Courage and Constancy, and arrive at Buckingham Palace, with the Union Jack at full mast, signalling to the extremely excited Evans girls that the Queen was in residence. They hang on the railings and watch the Guardsmen on duty, pacing up and down. Gwen whispers to me that she wants to be a Guardsman when she’s older. I whisper back that nothing could make me more proud. Once again I begin to go into a history reverie (I’m only ever half in the present) and imagine what it was like to be there, on that spot, on 8th May 1945 – VE Day. The jubilation, the flag waving, the overwhelming sense of.. ‘Daddy I’m hungry’ Yes, back in the present day it was time to move on again.

We walk across Green Park, and by now the children are tiring. I have Branwen in the backpack and Mair in my arms as we watch the Women’s March against Donald Trump go past. Thousands of people of all races, religions and sexualities taking part in a peaceful and ordered protest. I hope to myself that my girls will have the courage and conviction to stand up for what they believe in when they get older, whatever that may be, and I’m glad they saw it while we were there.

From there it’s back underground, and across to Westminster. The beating heart of British Government and democracy. It’s bloody heaving with people. Too many for us country bumpkins, and especially for me. I can feel my Wife looking at me, knowing only too well that I’ll be beginning to freak out. I don’t do heavy crowds. I’ve never actually had a panic attack in one, but it’s been close a few times. As the Dixie Chicks once said, I need wide open spaces. So after looking at Big Ben, and me nerding out over my absolute favourite London statue – Boudicca – what a woman (And for me the greatest of all Britons), we head across Westminster Bridge, counting the boats and red buses as we go, and turn left down the South Bank. We dodge and weave our way along the embankment, past the London Eye and it’s mile long queues, “Next time kids”.  We watch some skateboarders performing tricks (one stacks it and falls spectacularly on his arse and it’s one of the day’s highlights for me), and we call for a well earned drink in a bar. Mine and my brother in law’s beers disappear within seconds. Nothing induces thirst like carrying Children long distances. After the girls finish their fancy hot chocolates we move on to Blackfriars before jumping on a train back to my Sister’s house in the suburbs.

You hear a lot about big cities like London being cold and unfriendly. No one speaks to you. No one cares. Everyone’s miserable. But that’s never been our experience there at all. We’ve always found it to be vibrant, hospitable, and full of incredibly polite and lovely people. Just this day there was the West Indian guy at the station who came out to see if Ffion was ok after she got stuck in the ticket barrier and he saw it happen on the security camera, the glamorous French ladies who graciously moved along a few seats on the tube unprompted so our girls could sit down all together, and the Asian fella who picked up Branwen’s soggy and battered bunny and sprinted after us to return it to her after she dropped it without the rest of us realising. Not all heroes wear capes indeed.

Brexit and the current political situation in the UK has brought out the worst in a noisy minority of nasty idiots, and it’s sadly empowered many of them in our country. But adversity unfailingly brings out the best in ordinary people too, and it certainly has in our amazing, wonderfully multicultural capital city. People are going about their business and getting on with living life in London, like they have since it was a busy Roman fort occupied by legionaries from every corner of the Roman Empire in 200ad. And for a very brief time, 6 country people from Wales were a part of it.

Until the next time London. 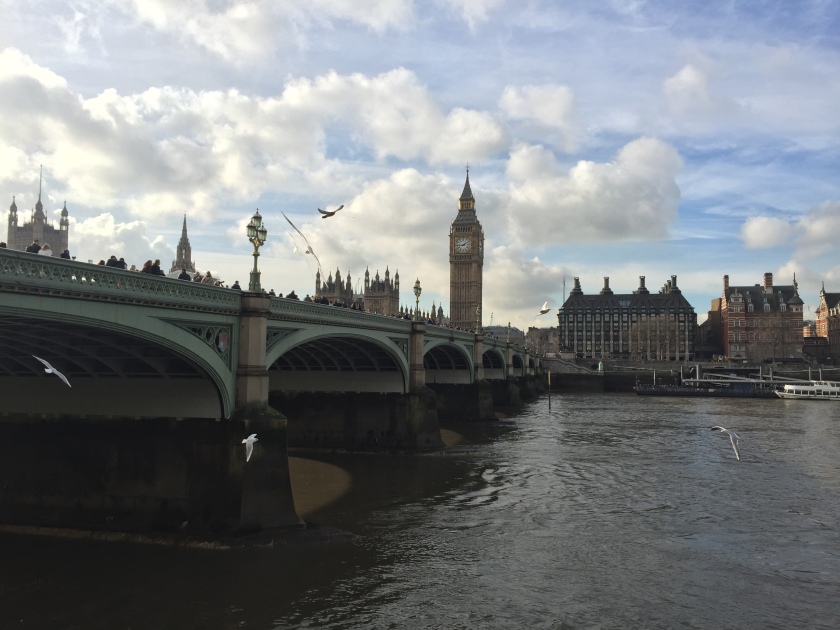